4K video camera is going to be popular soon.  Now, more and more entry level video editors are supporting 4K.   Although I used to use Edius Pro series that was fast, reliable, and beautiful, I decided to try my luck with Sony Movie Studio 13 Suite.  Basically, it’s Sony Movie Studio Platinum 13 with a number of extra add-ons.

The software allows users to import photo sequence to produce 4K video.  If you have time-lapse sequences, you can import them to create 4K video very easily.  Here is an example of 4K video produced from Nikon 1 V2 high speed continuous RAW photos.

In terms of actual use, the UI for the stabilizer is a bit confusion.  While the stabilizer is listed as an option for video event FX, the option was disabled at all.  To use the feature, I have to enable it through media FX.

Import is just the first half, output is the second half.  This is very true for some video editors.  They let you import virtually any format, but the output format may not be as flexible.  Movie Studio Platinum 13 allows users to export video in the more modern XAVC S HD/4K formats. 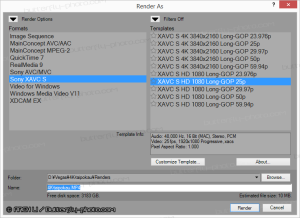 The US$49.95 entry level Movie Studio 13 does not support 4K.  If you want a 4K capable video editor, you need at least Movie Studio 13 Platinum at US$79.95.  If you need a 4K capable editor, I would recommend this software over other choices such as Corel Video Studio X7.  However, the Sony software did not include the handy SmartSound generated music.  Like many consumer software, the software is not perfectly stable in handling excessively huge projects so it cannot be the software for very serious work.  Overall, the software is recommended for amateurs who need to edit 4K video.